Drew Dayberry, founder of Roaring Pines, proprietor of it’s late Union Hill storefront, and secret web-developer, is on to his next big thing. His eponymous brand of “shaker-style” brooms may only seem the logical evolution of Drew if you know him personally, but if you’re of the unfortunate masses that has yet to meet him, let me lay it out for you… 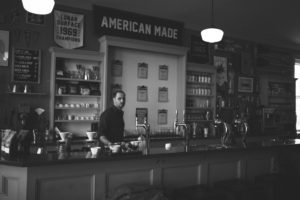 To truly ‘get it’, you must understand the origins of Roaring Pines. In 2012 Dayberry founded the company as an online distributor of American manufactured goods in hopes of representing quality domestic products that had been all but forgotten by younger generations and a culture of indulgent consumption. It wasn’t nostalgia or patriotism that necessarily led to Drew’s developing of Roaring Pines, but a general disconnect between producer and consumer that didn’t sit quite right with him.

“In a former life I built e-commerce sites for companies selling products made all over the world except in the United States. Unfortunately, we don’t make very much domestically anymore, but what we do is still  very useful. Roaring Pines was the idea of rounding up and highlighting what we, as a country, still make really well,” explains Dayberry.

“American manufacturing, for me, isn’t about saluting a flag or romantic ideas about large factories; it’s about spending your money as close to home as possible. I prefer to spend my money with neighbors, makers down the road, or manufacturers a few states over. Everyone wants to save the world, but, for some reason, they are fine with saving a few dollars to get something shipped from over seas on a giant diesel burning boat. Instead, they could just spend a few extra dollars and have the same thing made by someone right here.”

Since day one, Roaring Pines has carried brooms in its inventory of quality goods, but a few years back, it became increasingly difficult to maintain stock when two manufacturers closed simultaneously due to aging ownership and a deepening age gap in stakeholders. The sudden and drastic shift in one of America’s oldest and most quintessential exports piqued Dayberry’s interest to learn as much as he could about producing the brooms himself. After attending the John C. Campbell Folk School in Brasstown, NC, to launch his education on the matter, Dayberry continued said education with Jim Schaffer of Charleston Broom & Mop periodically over last year. When word came down that Mr. Schaffer would be soon retiring, Drew offered to purchase some of the company’s equipment.

Acquiring the equipment was absolutely essential to perpetuating the industry, particularly due to the fact that most, if not all, automated broom manufacturing machinery hasn’t been produced stateside in a half-century. Dayberry’s “new-to-him” stitching machine was one of the last models built in the late 60’s. A relic of industrial America, and a living reminder that some things just can’t really be improved upon; the root of Drew’s passion.

“Technology hasn’t advanced the broom in 100 years, its only made it worse. Most people don’t understand that broomcorn is an agricultural product harvested by hand, and it’s still done so because no piece of plastic can ever stand up to its sweeping capability. Cheap plastic brooms that don’t work have replaced the hard working broomcorn broom.” You can sense a slight frustration in his voice, and rightfully so. In hanging around Roaring Pines, or chatting with folks around Richmond, the constant question is: ‘Why?’. Why should we care? We should care for the same reason we’re out buying $2-300 jeans, metal straws, and indestructible coolers that keep ice for a week. “Apparently, the idea of spending $20 on a hardworking broom you can have for a decade as opposed to some $13 cheap plastic broom you buy once a year is an outrage.”

Admittedly, I was one of those folks until fairly recently. For months I would stop in for coffee and threaten to buy a broom “next time”, without really knowing why. Eventually it clicked; what Roaring Pines and Dayberry Brooms represents is what I strive to mimic in my daily life. Eat better food, and less of it. Buy quality clothes, and mend them. If it ain’t broke don’t fix it, and if it is, do.

As we mourn the loss of Roaring Pines’ storefront in Union Hill, we may take solace in knowing that it will relaunch this fall  popping up around town as a shopping experience of American made goods. For the time being, you will be able to find Dayberry Brooms at Accoutré and…

The former Roaring Pines space at 2025 Venable will be filled by the good folks of Gather Home & Garden of Church Hill and renamed Pomona. In addition to Gather Home and Garden’s current inventory of plants and growing mediums, proprietor, Melissa Micou, is excited to take on the legacy of the Roaring Pines soda fountain. For more check out GatherGarden.com or their @pomonaplants.